A little while ago, I was asked to have a look at how to boost the new business success rate  for a WPP-owned  digital agency in London.

It was a dismal experience, starting as soon as I went through the front door and presented myself to the lady on Reception, who took a long time to look up and acknowledge my arrival. She was very low energy.

Looking round, I felt my energy levels beginning to fall out of the sky, too.

The room had a grey floor. The walls were white or black, depending  upon which way I faced. Black is the colour of death, mourning and the night. Grey is one of the colours of depression. White is often linked to tranquillity, but it only added to the gloomy atmosphere. The colour temperature of black, grey and white are all low. There were plenty of surprises to follow, possibly the subject of a separate article, but let’s stick with the colours.

I was teaching some French students recently at The London College of Communication. We were discussing the importance of having an art director who paints as well as directs. This got us on to the subject of cars. I asked them, “What colour is a fast car?” 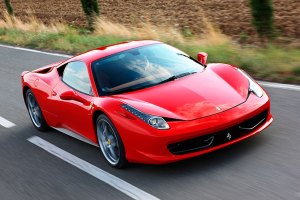 A sports car is red because Ferrari made it so.

And that, of course, is why you should judge a book by its cover. Any half-capable art director will put in all the cultural clues needed by a potential purchaser to judge if the book she holds is what she’ll enjoy reading.

So why had this digital agency got some key cultural signposts so badly wrong?

It turned out that nobody seemed to talk to each other. They went into work, booted up their computer, plugged in their earphones, ate sandwiches at their work station, went home and disappeared.

I think this was a failure of both leadership and management. The showreel looked lovely, but had no substance. I had no idea what was the point of view was which the agency hoped would win it new business.

The meaning of colours is a tiny part of semiotics.

Greg Rowland, who runs Greg Rowland Semiotics, says, “Semiotics is about understanding how the world of culture works. By analysing symbolism across brands, products, design, communications and popular culture we can uncover amazing new insights.”

I have found this to be very true. For example, I pitched for Sheridans a little while ago. We used Ginny Valentine and

her partner, Monty, to look at what the contrasting black and white liquids might mean to purchasers. As we discussed it, Ginny said, “It reminds me of the chess game between Faye Dunaway and Steve McQueen in The Thomas Crown Affair – tremendous tension.”

So, we took that observation, turned it into a pitch and an advertising idea, showed it to IDV, now Diageo, and Tony Scouller more or less gave us the business on the spot.

Semiotics covers all those areas which we mutually understand but never really need to discuss. In the UK, recent immigration has stretched this thin in some cases, but not maliciously. I recently discovered in a talk at the Jubilee School in Hackney to 5-6 year olds, most of whom are recent arrivals from Turkey and Africa, that they do not think of the Luftwaffe when the word bomb is used. They think of car and vest bombs, which explains their confusion as my ex-WW2 Royal Canadian Airforce mother, Myra, attempted to describe what the Blitz in London was like. The children were imagining old VW Beetles, stuffed full of TNT, being pushed out of the rear of Dornier 17s at night.

Finally, semiotics really do matter when it comes to being assessed by someone else.

No matter how hard we try to be fair when we’re interviewing  job candidates, we know within thirty seconds if we’re going to get along with the applicant. You can start an interview as a candidate well and end it badly, but you cannot start it badly and end it well.

Chaps: shower, shave, brush your teeth, don’t eat garlic or baked beans the previous evening, wear clean shoes, be on time, get your girlfriend to tie a tie around your neck, and look interested.

Girls: I don’t need to tell you what to do, but do bear in mind that many interviewers now are older women. I have recently seen this go hideously wrong.

If you want to know more about semiotics, and want to boost your new business hit rate, click on the links below, or send me a comment, and I’ll get in touch.

Finally, many thanks to Roger Morris for suggesting this topic. He had looked at the new lay out and colour of this blog, and had wondered what the transition from green to red might mean  to the blog’s readership. If there’s enough interest in the topic, we’ll take it further in a longer and more thorough post soon. If you have observations of your own about semiotics, please post a comment. I’m also interested in guest blogs on the subject.